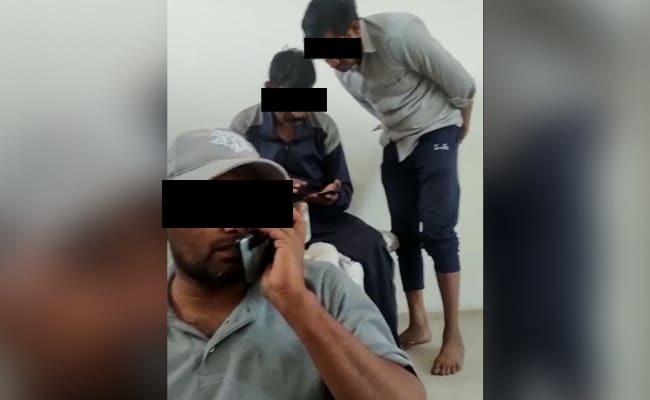 Afghanistan Crisis: The man sent a video to his family two days ago.

The Taliban’s return to power in Afghanistan after 20 years has left many Indians deeply worried over the safety of their loved ones stuck in Kabul and other parts of the country.

The parents of a 28-year-old man from Uttar Pradesh have appealed to the central government for the swift evacuation of their son and other Indians stranded amid the conflict.

The family of the 28-year-old, who works as a welder, lives in a village in eastern UP. He went to Kabul this January to work for a private firm. A video shared by him from Kabul shows him along with other Indians inside a room in what appears to be an apartment.

“Sir, we are very worried. All of us are worried,” a man on the phone can be heard saying. With tense expressions, other people in the video can also be seen speaking on the phone, apparently trying to arrange help.

A family member of this 28-year-old told NDTV the video was received two days ago when Taliban’s terrorists seized power in Kabul.

Afghanistan’s President Ashraf Gani fled the country and the terrorists were seen inside the Presidential Palace in images that shocked the world.

“My son is stuck. Earlier things were fine. But of late, he used to say there are a lot of problems. I spoke to him three days ago. He told me the government has changed and that the Taliban has seized power. He is ok but one does not know what the Taliban will do. I appeal to Prime Minister Narendra Modi to get him evacuated as soon as possible,” the father appealed while speaking to NDTV.

The man’ s wife said he was trying to remain calm even as Kabul descends into chaos.

“I speak to him everyday. He says he is trying not to panic. I spoke to him this morning too. He told me the company owners and managers where he worked are missing, and he does not even have his passport with him right now,” she shared.

Amid appeals, Pankaj Chaudhary, the newly-appointed Minister of State for Finance in the government of India, has assured people across the country. “Whenever there has been an issue abroad, the Modi government has helped Indians abroad. We evacuated Indians from Yemen. Amid pandemic, we got lakhs of people from abroad. About 100 – 150 Indian citizens are stuck in Afghanistan we will make all efforts to get them back to India at the earliest,” he said.

Over 120 officials, including India’s Ambassador to Kabul, were flown out today. Forty-five personnel were brought back on Monday.

The evacuation mission, however, faced multiple challenges over the last 48 hours.

Case Against Unknown Persons For Removing Tricolour From J&K Building

<!-- -->Unknown persons removed flag from atop a building in Kotranka, police said. (Representational)Jammu: A case was registered against unidentified persons for allegedly...
Read more

<!-- -->Some e,bassies have even broken contact with the Taliban government. (Representational)Kabul: After a month has passed since the fall of the Republic...
Read more
Load more

Case Against Unknown Persons For Removing Tricolour From J&K Building

<!-- -->Unknown persons removed flag from atop a building in Kotranka, police said. (Representational)Jammu: A case was registered against unidentified persons for allegedly...
Read more