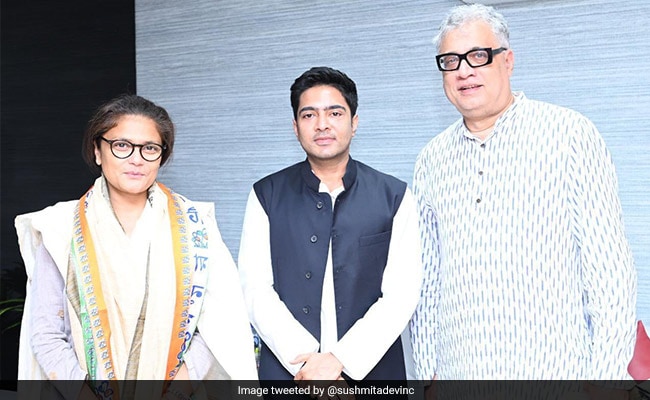 Sushmita Dev has joined the Trinamool Congress, surprising many in the Congress.

Sushmita Dev, who has changed camp from the Congress to Trinamool Congress,  today refused to elaborate on her reasons for the change, but said she has “No issues with Sonia Gandhi and Rahul Gandhi”.

“I have explained it in my resignation letter (to the party president),” she told reporters today when asked about the matter.

“I had a long association with the Congress. The Congress gave me a lot of opportunities. In my 30 years in politics, I haven’t demanded anything from the Congress high command. I hope the Congress president forgives me for my shortcomings,” said Ms Dev, the daughter of senior Congress leader Santosh Mohan Deb.

Ms Dev joined the Trinamool Congress last evening, surprising many in the Congress with her sudden exit. Several Congress leaders, including Kapil Sibal and Manish Tiwari, blamed it on the party leadership. Sources have said Ms Dev’s resignation letter was perfunctory.

“Sushmita Dev Resigns from primary membership of our Party While young leaders leave we ‘oldies’ are blamed for our efforts to strengthen it The Party moves on with : Eyes Wide Shut,” Kapil Sibal tweeted.

“If this is true it is most unfortunate. Why @sushmitadevinc? Your erstwhile colleagues & friends especially  the person who was National President of @nsui when you contested your first @DUSUofficial elections back in 1991 deserve a better explanation than this laconic letter?” read the tweet from Manish Tiwari.

Her joining of the ranks of Trinamool Congress, she added, “is unconditional”.

“Whatever work is given to me, I will try and fulfill and without any demand,” she added.