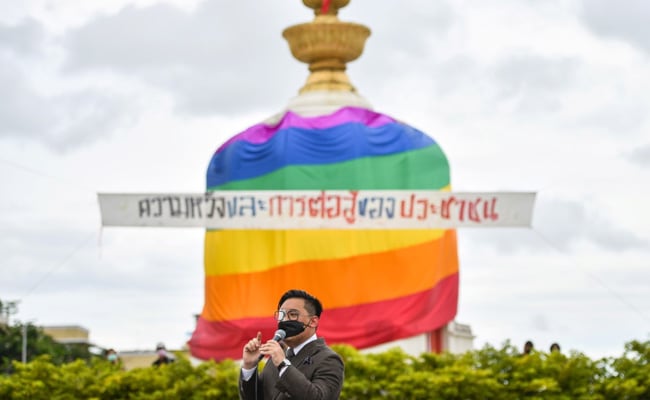 Nat was blinded permanently in one eye after being hit by a teargas canister at a protest.

Often seen at the wheel of one of his supercars, Thai ultra-royalist Tanat “Nat” Thanakitamnuay became a well-known face at demonstrations that ushered in Thailand’s 2014 coup.

Now he is back on the streets demanding the removal of coup leader Prayuth Chan-ocha as Prime Minister and reforms to the monarchy – a change of heart that points to the broadening of Thailand’s latest anti-government movement.

“It’s bad for your mental health to see an incompetent PM,” said Nat, 29, who was blinded permanently in his right eye last month after being hit by a teargas canister at a protest.

He switched sides in part because of anger over the government’s widely-criticised handling of the latest coronavirus outbreak, which has brought severe economic hardship as well as nearly 12,000 deaths.

That has given new life to a student-led protest movement that emerged last year with demands to limit the powers of King Maha Vajiralongkorn’s monarchy and remove Prayuth, a former army chief who seized power in 2014 after months of protests against the elected government of Yingluck Shinawatra.

After a lull due to coronavirus restrictions on gatherings, demonstrations against Prayuth have gathered renewed steam in recent weeks.

“The protests have broadened due to COVID-19 and its economic consequences,” Titipol Phakdeewanich, dean of Ubon Ratchathani University’s political science faculty, told Reuters. “That prompted a more diverse group of people to join.”

Defending the government’s handling of the pandemic, Anucha Burapachaisri, deputy secretary to the prime minister, told Reuters that all necessary measures to contain the spread of infections had been taken.

But a recent poll said fewer than 30% of people thought they could rely on the government of Prayuth, who rejects the accusations of opponents that he manipulated a 2019 election to keep power he had taken by force.

“Everybody suffers from the lack of democracy, regardless of how much their income changes,” said Nat.

Income is not a problem for Nat, a member of a Thai elite widely known as “HiSo” (High Society).

The son of a real-estate billionaire, he was educated at a British private school and has enjoyed a playboy lifestyle with his supercars, celebrity dates and his own rock band.

He said he had now cut himself off from his family, while dabbling in the stock market and cryptocurrencies.

His appearance at protests is very different to that of the youth activists, as he drives in his Range Rover along with a bodyguard and a secretary.

“It shocked us initially, but we thought that him joining us was very useful because it paved the way for others,” student activist Songpon “Yajai” Sonthirak told Reuters. “It shows how people can reform themselves and how we are inclusive.”

Nat said his time as a politician with the pro-establishment Democrat Party had made him suspicious of all those proclaiming loyalty to the monarchy.

He has joined calls for the removal of the lese majeste law outlawing criticism of the king, which can mean 15 years in jail and has been used against most of the youth protest leaders.

“We have to do whatever we can, whatever it takes,” he told Reuters. “If it will cost me another eye then so be it.”

US Defence Secretary Thanks India For Cooperation In Afghan Evacuation

<!-- -->The two leaders committed to continue monitoring the situation in Afghanistan, the Pentagon said. FileWashington: US Defence Secretary Lloyd Austin in a...
Read more
Load more