The Internet Is Thrilled To Meet Jennifer Aniston’s Lookalike 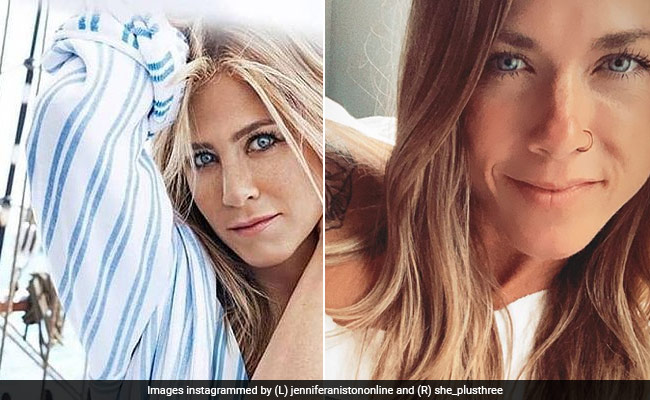 A collage of Jennifer Aniston and Lisa Tranel. (courtesy jenniferanistononline)

The Internet just learnt about Jennifer Aniston’s doppelganger and fans clearly can’t keep calm. Several Instagram users chanced upon pictures of the actress’ doppelganger and we must tell you that the resemblance is uncanny. In case you are wondering who the aforementioned lookalike is, we are here to help. Her name is Lisa Tranel and she is a 34-year-old social media star. Needless to say, fans of the actress were excited to see her lookalike and dropped comments on her Instagram posts. An Instagram user commented on her post: “I thought you were Jennifer Aniston.” Another added, “OMG Rachel.” Another comment read, “I straight up thought this was a picture of Jennifer Aniston for a second.” So did we, actually. “You were great in the Reunion special,” read another comment.

See some of the pictures of Lisa Tranel here:

Jennifer Aniston became a star after starring in F.R.I.E.N.D.S as Rachel Green – a rich girl, who makes it big in the fashion industry after serving cups of coffee at the Central Perk as a waitress.

Jennifer Aniston also has a successful film career, having starred in romcoms such as We’re The Millers, The Object of My Affection, Just Go With It, Along Came Polly, The Bounty Hunter and the Horrible Bosses series among many others. She recently reunited with her onscreen sister Reese Witherspoon for The Morning Show. Reese starred as Rachel’s spoilt sister Jill Green in F.R.I.E.N.D.S, who had zero filters.

The actress occupied a spot on the list of trends after ever since dating rumours of her and F.R.I.E.N.D.S co-star David Schwimmer surfaced. When the F.R.I.E.N.D.S Reunion aired in May, the two confessed that they were crushing on each other, when they starred as friends/ lovers in the popular sitcom.