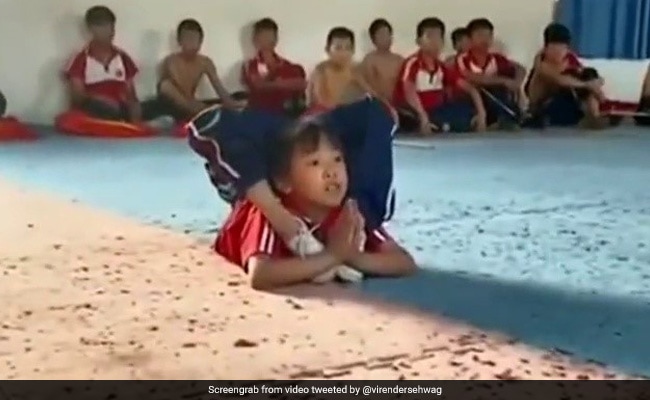 Virender Sehwag was among those who shared this viral gymnastics performance on Twitter.

If a five-time Olympic gold medallist finds something to praise in a young girl’s gymnastics routine, you can be sure it’s worth a watch. Nadia Comaneci took to Twitter on Sunday to retweet a video of a girl performing jaw-dropping stunts at what appears to be a gymnastic training centre. Dressed in a red shirt and sweatpants, the girl displays impressive flexibility as she twists, turns and performs one stunt after the other. Her classmates were seen watching her routine in the video which has gone viral on Twitter with over 4.7 million views.

Watch the video below:

The bit at the end ???? pic.twitter.com/Vcep9dQ0aT

“Wow. Such talent.. composure.. flexibility,” she wrote – high praise indeed, especially coming from the first gymnast ever to be awarded a perfect 10 at the Olympics.

Former cricketer Virender Sehwag also shared a clip of the performance on Twitter this morning. “Humans can do all things if they will,” he wrote while posting the clip.

Humans can do all things if they will. pic.twitter.com/5Ed0YxzaBb

Footage of the girl’s performance has gone massively viral on the microblogging platform, where many showered praise on the girl.

“Not only incredible flexibility, but also the discipline and focus at that age… Amazing!” wrote one Twitter user.

My goodness! Not only incredible flexibility, but also the discipline and focus at that age… Amazing!

But while many praised the young gymnast, others expressed concerns about the amount of training that would have made such flexibility possible.

Although this is impressive, one has to consider her age. If she were to continue to have her body’s ligaments, tendon’s, muscles and even bones disarticulating to bend in such unnatural ways, she will no doubt have arthritic changes in her bones by the time she is 20.

Don’t get me wrong, i totally applaud her commitment, discipline, dedication & flexibility, and its great to see kids doing something other than playing on the x-box…but if she continues at this level of intensity she will have problems in later life. Sorry ????

In 2019, a shout-out from Nadia Comaneci catapulted two schoolchildren from Kolkata, who were seen doing cartwheels and flips in a video, to viral Internet fame, eventually earning them government support. Her tweet applauding the children eventually led the two being promised gymnastics scholarships by the Sports Authority of India.

<!-- -->The Whisky Exchange has a catalogue of over 10,000 products. (Representational)London: London-based Indian-origin entrepreneur brothers Sukhinder and Rajbir Singh have agreed to...
Read more
Latest Stories

<!-- -->Centre's petition said the vaccine policy is based on experts' opinion and clinical trials. FileKochi: The Centre today filed an appeal in...
Read more

<!-- -->Washington: The Quad partnership is on track to produce at least a billion vaccine doses in India by 2022, US President Joe...
Read more
Load more