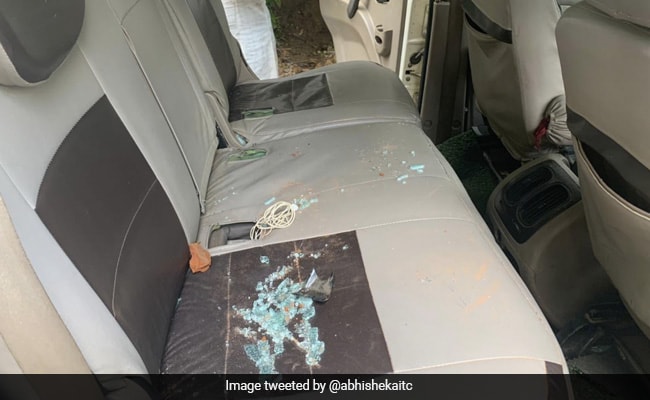 The Trinamool Congress on Saturday alleged that two of its youth leaders from West Bengal were injured when their vehicle was allegedly attacked by BJP activists in Tripura’s Dhalai district.

Following the incident, Trinamool national general secretary Abhishek Banerjee, who is West Bengal Chief Minister Mamata Banerjee’s nephew and the de facto number 2 in the party, said that he will visit Tripura on Sunday.

Denying the allegation, the BJP claimed that the TMC is a non-factor in Tripura, and West Bengal’s ruling party is spreading the “virus of political violence” in the northeastern state, where “outsiders” are fomenting trouble.

Police said that two persons were attacked by a group of unidentified miscreants at Ambassa and their vehicle was partly damaged.

Trinamool spokesperson Debangshu Bhattacharya alleged that party leaders Sudip Raha and Jaya Dutta were injured in an attack by BJP workers in Ambassa while they were on their way to Dharmanagar in North Tripura district.

“The miscreants attacked the car, in which I was also seated, with lathi (baton) and lethal weapons, and pelted the vehicle with stones. Their act shows that they have sensed defeat in next year’s assembly elections in the state,” Mr Bhattacharya told reporters.

Shortly after the incident, BJP and Trinamool supporters faced off and staged road blockades 500 m apart on National Highway 8, prompting the police to fire tear gas shells to disperse the mob and bring the situation under control.

The road blockades forced Chief Minister Biplab Deb to take a detour while returning to Agartala after attending some inauguration programmes in Dharmanagar.

Trinamool workers led by Subal Bhowmik, a former vice-president of Tripura BJP who recently switched sides, were protesting the alleged ransacking of a TMC party office by saffron party workers in Batarasi area of Dharmanagar on Friday night.

Police detained Mr Bhowmik and some other Trinamool workers, and cleared the road. “Our party office was damaged by BJP-backed goons. When we staged the road blockade, police treated us like miscreants,” Mr Bhowmik told reporters.

Condemning the alleged attack on the youth leaders in Ambassa, Trinamool national general secretary Abhishek Banerjee said that the incident shows that there is “goonda raj” (lawlessness) in Tripura.

“The GOONS of @BJP4Tripura have shown their TRUE COLOURS! This barbaric attack on Trinamool workers reveals the ”GOONDA RAJ” in #Tripura under @BjpBiplab”s Govt.! Your threats and attacks only prove your inhumanity. DO WHAT YOU CAN~CHECK~Trinamool will not budge an INCH!,” the Diamond Harbour MP, displaying photographs of the injured persons and the vehicle, tweeted.

“Tomorrow, I am coming to #Tripura to stand by every Trinamool worker who were brutally attacked by @BJP4Tripura goons today. It is my promise that I shall continue fighting till the very last drop of my blood. STOP ME IF YOU CAN @BjpBiplab!,” he said in another Twitter post.

This will be Mr Banerjee’s second visit to the northeastern state in seven days. His convoy was also attacked allegedly by BJP workers during his previous visit on August 2.

Attacking the Tripura Chief Minister, West Bengal minister Bratya Basu tweeted: “The brutality with which @BjpBiplab has greeted Trinamool workers in the state, shows how frightened he is of any voice that dares to oppose his TYRANNY! But guess what, Mr. Deb? Our fight for the people of #Tripura will not stop. We will continue standing up for them!”

Denying the BJP’s role in the alleged attack on Trinamool workers, the party’s Tripura unit spokesperson Nabendu Bhattacharya said, “Why should our party workers attack TMC activists? The party is no threat to us. The TMC does not have the strength to even win a seat in panchayat elections.”

“We are not worried about the TMC in Tripura. Our CM is a tolerant person, which is why he took a detour to avoid any untoward incident,” Mr Bhattacharya told PTI.

West Bengal BJP chief Dilip Ghosh said, “The TMC is instigating violence in Tripura. They are staging a drama. No one gives much importance to the TMC in the northeastern state.”

West Bengal BJP vice-president Jayprakash Majumdar alleged that the Trinamool is “spreading the virus” of political violence in peaceful Tripura, where “outsiders” are fomenting trouble.

Condemning the alleged attack on the TMC youth leaders, CPI(M) West Bengal state committee leader Sujan Chakraborty said, “There is jungle raaj in Tripura, where the BJP is attacking its political rivals.

After attacking CPI(M) and other Left Front activists in Tripura, the BJP has now trained its guns on the Trinamool. We condemn any attack.”

He, however, also took a dig at the Trinamool, saying, “CPI(M) activists have come under attack in both Tripura and West Bengal in the last couple of years by the BJP and the TMC respectively. When our workers were attacked in the northeastern state, TMC had never protested.”