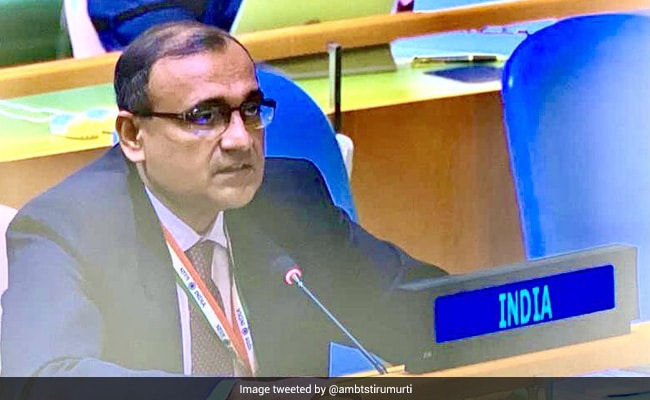 The meet on Afghanistan urged members to call for an end to the violence, the envoy said.

The crucial UN Security Council meeting on Afghanistan, held within the first week of India’s Presidency of the powerful global body, urged members to call for an end to the violence and hostilities, and helped reveal to the outside world the dire situation in the war-torn country, India’s envoy has said.

India assumed the Presidency of the UN Security Council for the month on August 1 and wrapped up a hectic first week with discussions on Afghanistan on August 6 amidst a deteriorating security situation in the country as the Taliban carried out its military offensive.

A meeting on Afghanistan had not been scheduled during the month as per the Council’s Programme of Work for the month that was adopted on India’s first working day of its Presidency last week.

India’s Permanent Representative to the UN and Security Council President for month of August Ambassador T S Tirumurti had also said during a press conference that he expected “probably the Security Council will be looking at this aspect sooner rather than later” on Afghanistan.

“I think the UN Security Council meeting on Afghanistan was crucial and timely. It galvanised both Members of the Council and outside to call for an end to the violence and hostilities, and helped reveal to the outside world the dire situation facing Afghanistan and its people, especially women, children and minorities,” TS Tirumurti told PTI, as India wrapped up its first week of the  Presidency.

Tirumurti said he is “happy that we could prioritise this meeting and hold it in our first week of Presidency itself.”

At the UNSC meeting, Council members strongly condemned the increase in violence in Afghanistan, with permanent and veto-wielding member US asserting that the “Taliban must hear from the international community that we will not accept a military takeover of Afghanistan or a return of the Taliban’s Islamic Emirate.”

The UNSC meeting on Afghanistan came as the talks between the Afghan government and the Taliban in Doha are stalled and just days before the “extended Troika” meeting scheduled to be held in Qatar on August 11.

Talks under the format had earlier taken place on March 18 and April 30.

The crucial meeting being convened by Russia on the fast-evolving situation in Afghanistan is expected to see the participation of Pakistan, China and the US.

During the Council briefing, Afghanistan’s UN envoy Ghulam Isaczai said that the Taliban continued to enjoy safe haven in and supply and logistic line extended to their war machine from Pakistan.

“Graphic reports and video of Taliban fighters congregating close to the Durand Line to enter Afghanistan, fundraising events, transfer of dead bodies for mass burial, and treatment of injured Taliban in Pakistani hospitals are emerging and are widely available,” Isaczai told the Council.

“This is not only a naked violation of the 1988 UN Security Council sanction regime, but also leads to further erosion of trust and confidence towards establishing a collaborative relationship with Pakistan to end the war in Afghanistan,” Isaczai said.

Stressing that “the future of Afghanistan cannot be its past,” TS Tirumurti, addressing the UNSC briefing in his national capacity, said terrorist safe havens and sanctuaries in the region must be dismantled immediately and terrorist supply chains disrupted, a reference to Pakistan, as New Delhi stressed it is time for the Security Council to decide on actions to ensure an immediate cessation of violence.

“It needs to be ensured that Afghanistan’s neighbours and the region are not threatened by terrorism, separatism and extremism. There needs to be zero tolerance for terrorism in all its forms and manifestations,” he said, adding that “it is equally important to ensure that the territory of Afghanistan is not used by terrorist groups to threaten or attack any other country.

Those providing material and financial support to terrorist entities must be held accountable, he said.

India’s second week of the Presidency will open with Prime Minister Narendra Modi chairing a high-level virtual open debate on ‘Enhancing Maritime Security — A case for International Cooperation” on August 9.

The meeting on maritime security, one of the three signature events scheduled during India’s presidency, assumes significance as this will be the first time that an Indian prime minister would be presiding over a meeting of the UN Security Council.

“The Maritime Security high-level event with be the first of its kind in the Security Council. This holistic concept has never been discussed before in the Council. This is also something of high priority to our Prime Minister for international peace and security,” Tirumurti said, adding that “Our Mission has worked closely with the UN Secretariat and with other member states of the Council, to put this high-level event together.”

<!-- -->Local state police or home guards should not be given any poll duty, urged the BJPNew Delhi: Ahead of the crucial bypoll...
Read more
Latest Stories