US Really Messed It Up In Afghanistan, Says Pakistan PM Imran Khan 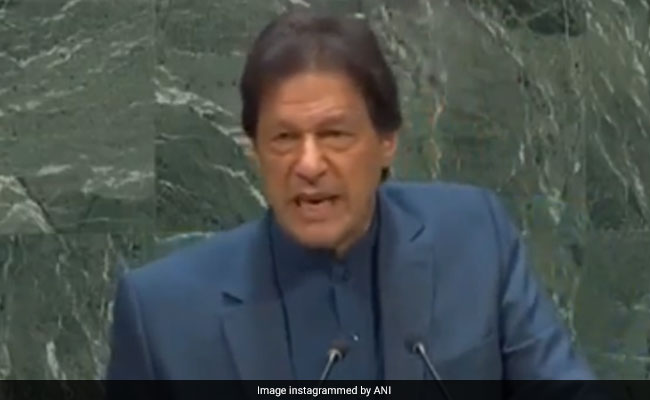 Imran Khan criticised the US for trying to “look for a military solution in Afghanistan.” (File)

Pakistan Prime Minister Imran Khan has said that the US “really messed it up” in Afghanistan as he questioned the American motive for the 2001 invasion of the country in the first place and then their subsequent attempts of seeking a political solution with the Taliban from a position of weakness.

Khan also said that the only good solution to Afghanistan’s situation is through a political settlement that is “inclusive” an” involves all factions, including the Taliban.

“I think the US has really messed it up in Afghanistan,” Khan said during an interview with Judy Woodruff on PBS NewsHour, an American news programme, aired on Tuesday night, Dawn newspaper reported.

Under a deal with the Taliban, the US and its NATO allies agreed to withdraw all troops in return for a commitment by the militants that they would prevent extremist groups from operating in areas they control. US President Joe Biden has announced that American troops will be out of the country by August 31.

The Taliban ruled Afghanistan by brute force from 1996 to 2001 when the US invasion toppled their government.

The US invaded Afghanistan in October, 2001 after the Taliban refused to hand over al-Qaeda”s leader Osama bin Laden, who was behind the September 11, 2001, terror attacks in America.

Khan criticised the US for trying to “look for a military solution in Afghanistan, when there never was one”.

He lamented that by the time the US realised that there was no military solution in Afghanistan, “unfortunately, the bargaining power of the Americans or the NATO (North Atlantic Treaty Organisation forces) had gone”.

The prime minister said the US should have opted for a political settlement much earlier, when there were as many as 150,000 NATO troops in Afghanistan.

“But once they had reduced the troops to barely 10,000, and then, when they gave an exit date, the Taliban thought they had won. And so, therefore, it was very difficult for now to get them to compromise,” he said.

When the interviewer asked whether he thought the Taliban resurgence was a positive development for Afghanistan, the prime minister reiterated that the only good outcome would be a political settlement, “which is inclusive”.

“Obviously, Taliban (will be) part of that government,” he added.

Khan described the “worst-case scenario” as being one where Afghanistan descends into a civil war. “From Pakistan’s point of view, that is the worst-case scenario, because we then … we face two scenarios, one (of them being) a refugee problem,” he said.

“Already, Pakistan is hosting over three million Afghan refugees. And what we fear is that a protracted civil war would [bring] more refugees. And our economic situation is not such that we can have another influx,” he said.

Elaborating on the second problem, he expressed concerns that the fallout of a potential civil war across the border could “flow into Pakistan”.

Prime Minister Khan explained that the Taliban were ethnic Pashtuns and “if this (civil war and violence in Afghanistan) goes on, the Pashtuns on our side will be drawn into it.”

When asked about Pakistan’s alleged military, intelligence and financial support to Afghanistan, he replied: “I find this extremely unfair”.

Khan said that 70,000 Pakistanis had died in the aftermath of the US war in Afghanistan, even when “Pakistan had nothing to do with what happened [in New York on September 11, 2001].”

At the time, Al Qaeda was based in Afghanistan and “there were no militant Taliban in Pakistan,” he said, maintaining that no Pakistani national was involved in the attack on the World Trade Centre.

“We had nothing to do with,” he repeated, regretting that the war in Afghanistan had resulted in a loss of $150 billion to Pakistan’s economy.

When questioned about his controversial remarks on rape, which had drawn widespread criticism and earned him rebuke from civil society, political circles and on social media, Khan said that “anyone who commits rape, solely and solely, that person is responsible.”

“No matter whatever, how much ever a woman is provocative or whatever she wears, the person who commits rape, he is fully responsible. Never is the victim responsible,” he clarified.

He claimed that his comments in the HBO interview were taken out of context.

He said that he would never say “such a stupid thing” that “a person who’s raped is responsible … It’s always the rapist that is responsible.”

<!-- -->Government jobs were announced for migrant Kashmiri Pandits in 2009 in J&KSrinagar: For Navjot Kumar, it's a fight over identity to get...
Read more

<!-- -->Government jobs were announced for migrant Kashmiri Pandits in 2009 in J&KSrinagar: For Navjot Kumar, it's a fight over identity to get...
Read more