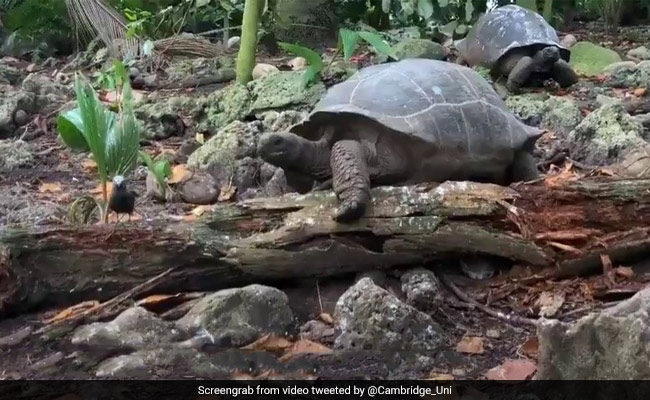 Seychelles giant tortoises are known to be the largest herbivores on Galapagos and Seychelles islands.

Researchers have documented for the first time a Seychelles giant tortoise hunting and feeding on a baby bird. Until now, the tortoise species had been known as a lifelong herbivore. Did this tortoise just decide to break ranks and have meat for a change of taste? The official Twitter handle of Cambridge University uploaded the video and called it an “unexpected moment when a giant tortoise — thought to be vegetarian — attacks and eats a tern chick”. They also added a disclaimer, “some viewers may find scenes in this film distressing”.

The video, taken on Fregate Island in July 2020, shows an adult female tortoise chasing a tern chick along a wooden log. The bird keeps flapping its wings to ward off the tortoise but stops at the end of the log. The tortoise moves towards it, opens its mouth and clams its jaws over the little bird’s head. The beheaded bird rolls down on the ground while the tortoise continues to have its food.

Researchers capture on film the unexpected moment when a giant #tortoise – thought to be vegetarian – attacks and eats a tern chick: https://t.co/GsAWXSltRs

Warning: some viewers may find scenes in this film distressing.@Peterhouse_Cam@jstgerlach#Seychellespic.twitter.com/wOTb7WN9JO

A research paper published in the journal Current Biology revealed that the Seychelles giant tortoise (Aldabrachelys gigantea) eating a live bird was the “first documentation of deliberate hunting in any tortoise species”.

The research revealed that this particular tortoise was observed on July 30, 2020, on Fregate Island, which is a privately owned island in the Seychelles group and is managed for ecotourism.

Many users commented on the video. One wrote, “I think the tortoise was hungry and there was no food around for her taste so it ate the bird.”

Another called it “amazing.”

A user made fun of “virtue signalling” by some vegetarians and wrote, “I know many vegetarians who momentarily turn to a carnivore diet — when no one is watching and they have nowhere to signal their virtue.”

I know many vegetarians who momentarily turn to a carnivore diet — when no one is watching and they have nowhere to signal their virtue.

The research suggests that “the exceptional combination” of a population of terns living with the resident population of giant tortoise has led to conditions where the tortoise species might have got used to hunting birds. Researchers note that “the ground under the colony is littered with dropped fish and chicks that have fallen from their nests.” This, too, could have given the tortoise species a taste for meat.

The research further suggests that the way the tortoise chased and chomped down the bird’s head showed that it had previous experience.

In a Guardian report, Dr Justin Gerlach, a researcher at the University of Cambridge’s Museum of Zoology who led the study, said, “Our observation highlights that when ecosystems are restored, totally unexpected interactions between species may appear – things that probably happened commonly in the past but we’ve never seen before.”

Seychelles giant tortoises are known to be the largest herbivores on Galapagos and Seychelles islands, consuming up to 11 per cent of the vegetation.

Another report in CNN quoted a statement by Justin Gerlach, director of studies at Peterhouse, Cambridge and affiliated researcher at the University of Cambridge’s Museum of Zoology. Mr Gerlach said, “This is completely unexpected behaviour and has never been seen before in wild tortoises.”

“It was a very slow encounter, with the tortoise moving at its normal, slow walking pace — the whole interaction took seven minutes and was quite horrifying,” he said.

Anna Zora, the conservation manager on Frégate Island and co-author of the study, who captured the incident, said that she “sat and watched” when she “saw the tortoise moving in a strange way”. Finally, she began filming, when she “realised what it was doing”.

<!-- -->PM Modi said that he aims to strengthen partnership with US through the visit. (File)New Delhi: Prime Minister Narendra Modi, before leaving...
Read more
Load more