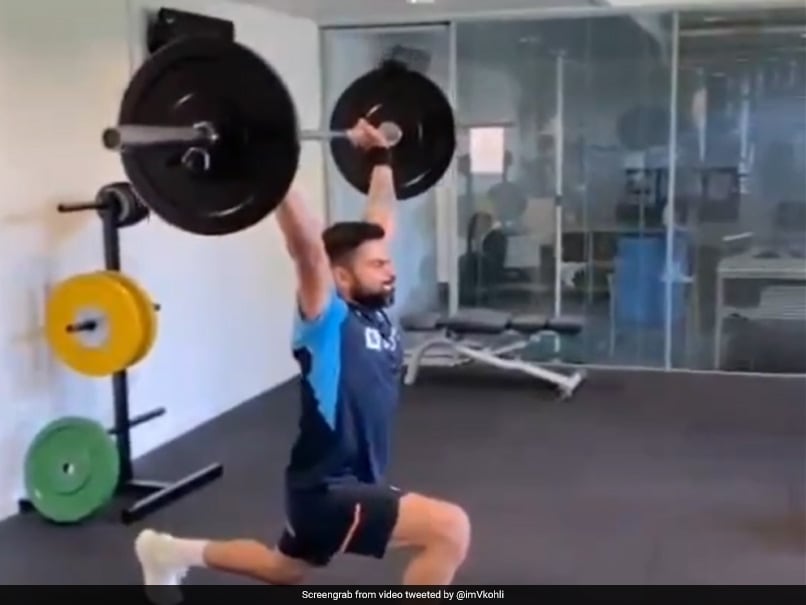 Virat Kohli during a gym session ahead of third Test vs England.© Twitter

Virat Kohli, who is an epitome of fitness, has been sweating it out in the gym in England. The India captain took to Twitter to share a short video of himself lifting weights as he geared up for the third Test against England, starting Wednesday, with a rigorous gym session. “There’s literally no substitute to hard work,” Kohli captioned the video on Twitter. Virat Kohli is in the UK for the ongoing five-match Test series which the visitors lead 1-0 with three games to play.

After Kohli tweeted the video, fans came in numbers to applaud the Indian skipper’s fitness routine. Kohli has not hit a century in international cricket for a while but after seeing him sweating it out in the gym, cricket fans feel that the milestone is just around the corner.

All the best King pic.twitter.com/LL4NQH7qB7

After a memorable win at Lord’s in the second Test, Kohli along with his wife Anushka Sharma enjoyed a vegan lunch in London.

The India captain got off to a fine start in the first innings of the Lord’s Test but fell eight runs short of a half-century.

After a string of low scores, Kohli will be eyeing to get a big score under his belt in the third Test against England.

Kohli is one century away from surpassing former Australia skipper Ricky Ponting as the captain with most hundreds across formats in international cricket.

Virat Kohli has backed his RCB teammates from Sri Lanka to do well in IPL 2021.© AFPWanindu Hasaranga and Dushmantha Chameera could play...
Read more
Sports