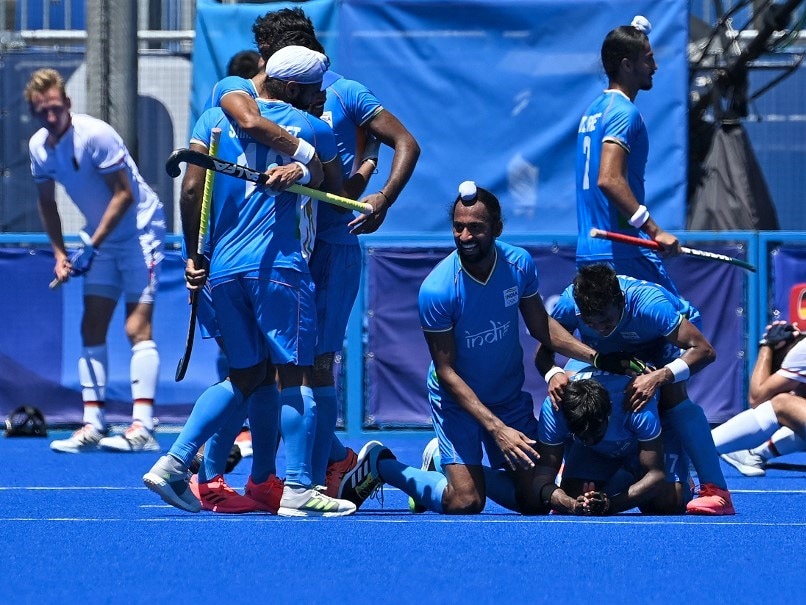 India sealed a historic 5-4 win over Germany in the men’s hockey bronze medal match at the Tokyo Olympics on Thursday. The victory helped India end their 41-year wait for an Olympic medal in hockey. The Indian men’s hockey team last won a medal at the 1980 Olympics, bagging a gold at the Moscow Games. The bronze medal fixture on Thursday at the Oi Hockey Stadium was a closely-fought affair, with both teams battling it out for supremacy. However, it was India who completed a stunning comeback, setting off jubilant celebration on the field. India’s official Olympic and Paralympic Games handle posted a video of the “unforgettable moment” after the final whistle on Twitter.

Here is the video:

The one that #IND has been hungry for over 41 long years. #Tokyo2020 | #UnitedByEmotion | #StrongerTogether | #BestOfTokyo | #Hockey | #Bronze pic.twitter.com/R530dyTjS1

Simranjeet Singh scored a brace for India while Hardik Singh, Harmanpreet Singh and Rupinder Pal Singh added their names on the scoresheet.

Germany began on a strong note with Timur Oruz scoring in the second minute of the first quarter. Simranjeet levelled the score at 1-1 with a 17th-minute equaliser.

The third quarter saw India completely change the match with a goal each from Rupinder and Simranjeet. India went into the final quarter with a 5-3 lead.

After numerous tries, Germany finally managed to convert a penalty corner in the fourth quarter but could not find the equaliser as the Indian defence held firm.

PBKS vs SRH: Harpreet Brar “Can Do Everything,” Says Punjab Kings Captain KL Rahul After Thrilling Win Over SRH

KL Rahul was full of praise for Punjab Kings' Harpreet Brar after their win over SRH.© InstagramPunjab Kings pulled off a thrilling win...
Read more
Sports

<!-- -->The police have said the question of jurisdiction is being discussed (Representational)Coimbatore, Tamil Nadu: A 26-year-old Flight Lieutenant in the Indian Air...
Read more
Load more