Woman Falls At Doctor’s Feet, Desperation In UP District Hit By Dengue 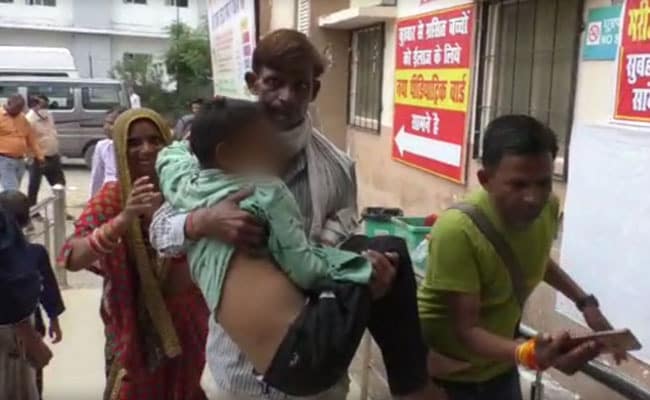 The 12-year-old boy being rushed into the UP hopsital

Having waited for well over an hour outside a government hospital in western Uttar Pradesh’s Firozabad, the mother of a 12-year-old fell at the feet of a doctor on Sunday evening as her son was granted admission capturing the desperation of patients and their relatives in the district battling a severe form of dengue that has hit children the most.

At least 53 people, including 40 children, have died in Firozabad district in the last 10 days from dengue. The state government said most of the deaths were due to “Dengue Haemorrhagic Fever,” which is a severe form of the disease.

The videos, shot by journalists reporting from the dedicated hospital treating dengue cases in Firozabad on Sunday, showed the family waiting outside with the boy slumping on the ground and his head resting in the lap of a girl. His mother and few others are sitting around him. Later the boy, dressed in shirt and trousers, is scooped up in arms by a man and taken inside the hospital where a doctor is seen examining him.

At this point the mother breaks down and falls at the feet of Dr Sangeeta Aneja, the principal of the medical college in the town.

As the mother of the child is seen wiping tears with her saree, Dr Aneja consoles her and is seen directing staff members to take the child inside. “Ghabrao mat, ghabrao mat (Do not worry, do not worry)”, Dr Aneja said reassuring the woman.

“There is nothing like that. There are 540 children admitted here… Everybody wants to get admitted. They are even okay with even two people on one bed. They are right; our focus is also to save lives. The moment we got to know, the child was admitted. I am sitting right here to make sure no patient is inconvenienced,” said Dr Aneja, when asked about the delay in admission.

Union Health Ministry sources have told NDTV that more than 50 per cent of the approximately 200 samples collected from Firozabad and nearby areas had tested positive for dengue.

“We have 755 surveillance teams in place and we had 64 special camps today (Sunday) where 4,469 patients came in today. Of which 3044 patients were of fever. 236 samples returned positive for dengue and we got 4 confirmed cases of lepto spirosis. We have also got scrub typhus cases,” said Dr Dinesh Kumar Premi, Chief Medical Officer, Firozabad.

Sources also said authorities are treating the rash of cases in Firozabad as a “dengue outbreak”.

Other districts in western UP like Mathura and Agra have also reported a rise in dengue, with hospitals teeming with children who are suffering from viral fever and dehydration.

Chief Minister Yogi Adityanath visited Firozabad a few days ago and said all measures would be taken to help those who needed treatment. The top health official of the district, its chief medical officer, was transferred out after Yogi Adityanath’s visit.